From Graduate to Software Manager

In his role as a Brainlab Software Manager, Daniel has had many opportunities to work on exciting and innovative projects. Read his success story below to find out how he has developed over the years thanks to his career at Brainlab. 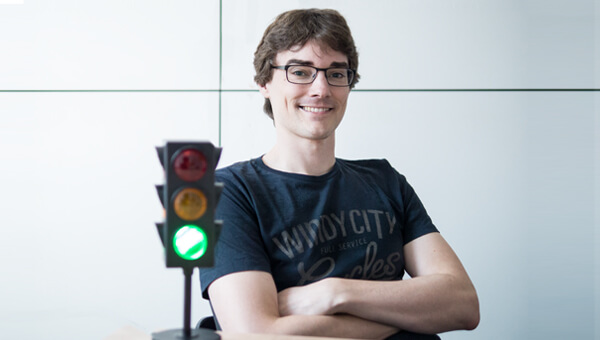 I joined Brainlab in 2007 right after finishing my thesis at the Technische Universität München (TUM). Friends had told me about this great company they work for so I applied at Brainlab as a Software Engineer. The interview took place one week after I submitted my application and – I got the job!

The first project I worked on was the Digital Lightbox. The Digital Lightbox is a wall mounted touch device with a 30 inch main display. At the time, this was quite a huge touch-enabled screen. At the beginning, the team for developing the Digital Lightbox software consisted of three software engineers and one project manager. One of the cool things about this device was that we could experiment with touch-based exploration of medical image data on a large scale. It was all about making the data easily available to physicians in offices and operating rooms. In my final years at university, I had focused on computer graphics which I enjoyed a lot. So it was natural and motivating for me to work on touch-based 3D volume visualization.

After having finished the 3D visualization project successfully, I joined the Cranial Navigation Team to develop new 3D features for use in image guided surgery. One of the first features I implemented helps neurosurgeons to simulate the craniotomy with a navigated virtual cut before they actually open the skull.

Later, the idea of navigated virtual cuts was extended to recording the location of the residual tumor during a tumor resection. I learned a lot about cranial surgery from inside and outside the operating room.

Over the years I have had the opportunity to attend several conferences including the computer graphics conferences Eurographics and SIGGRAPH as well as the C++ conference ACCU. I am a software developer from tip to toe with a passion for C++. This is why I have now started hosting C++ training sessions and I even recently gave a talk at a MUC++ meetup. I enjoy the exchange with other professionals. It helps one to see problems from a different perspective.

Since 2014, I have been coordinating the development of the base C++ framework including responsibilities for software architecture at Brainlab. This new role has again given me the opportunity to combine passion with profession and was one which I gladly accepted. Right now, the first thing I do whenever I get back to my office is to check the traffic light on my desk which tells me if automated unit-tests have failed!

What else is great about Brainlab? The restaurant, the people, and the chance to see your contribution to a final product live in action during surgery!