from applicant to events manager

The Brainlab Events team puts all their passion and energy in ensuring that all tradeshows and congresses we attend are highly organized and communicate our company vision. Heading this department is Karin, who applied for a sales assistant position at Brainlab and ended up building our solid international Events team over her 15 years with us. We recently sat down with Karin to hear the story of her success. 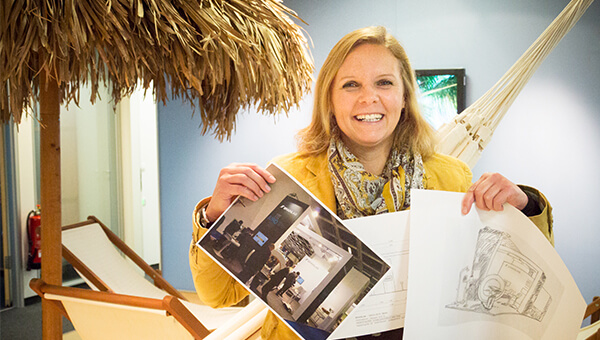 Nearly 15 years ago, Karin walked into CEO Stefan Vilsmeier’s office seeking a position as a Brainlab Sales Assistant for France. Two and half hours later, she walked out an Event Manager and soon found herself orchestrating Brainlab appearances at the most popular and widely respected tradeshows in the US and Germany. Karin is just one of many employees at Brainlab who were looking for a job, but found a dream career instead. Karin talked to us about her experience over the last 15 years maintaining our tradeshow presence.

Karin: I joined Brainlab at a very early stage in 1999. I hadn’t considered it at the time, but Stefan Vilsmeier recognized immediately that thanks to my five years organizational experience at the Munich International Tradeshow Center and my language and economics studies, events was the perfect area for me. I accepted the challenge and we started off as a two member team – I covered all organizational issues for exhibitions and my colleague Thomas took care of all logistical and technical issues for our tradeshow booths. At that time, we covered four major US shows, two international congresses and two big national German congresses in the field of Neurosurgery and Radiotherapy respectively.

Over the next 14 years, with Brainlab growing its product portfolio to include Ortho, Spine, ENT/CMF and E-Health and, in parallel, expanding into key regions and emerging markets worldwide, I continuously developed the Events and Exhibits processes. I built up a core congress team of 7 tradeshow enthusiasts at Brainlab headquarters, while consulting and supporting colleagues in our global subsidiaries. At Brainlab, 16 dedicated and motivated colleagues worldwide organize around 250 congresses, symposia and workshops throughout the year.

What I like about my position: Making the most out of each single congress, no matter if it’s large or small; the interdisciplinary collaboration and internationality; offering our customers a comfortable interaction platform; the touch and feel of the booth; the challenge of last-minute changes; the excitement just before the show opens; our tradeshow booth full of people, chatting, discussing and feeling good. Basically, I just like to see the positive outcome of an event after weeks and months of planning.