Take a deep dive into the history and science behind surface guided radiation therapy (SGRT). Learn in detail how this technology works and supplements the accuracy of image guided radiotherapy (IGRT) systems.

The use of imaging, like X-Ray, during a radiation therapy treatment to periodically verify that the patient’s internal anatomy aligns with pre-treatment scans. This ensures the desired target—and not the healthy anatomy around it—is being irradiated.

What is surface guided radiotherapy?

The constant monitoring of the patient’s surface movement and the comparison to a pre-recorded reference surface offers the possibility to detect and reduce intra-fraction patient motion.

The general goal for all surface imaging techniques is to measure the (x, y, z) coordinates of points on a surface. The result of the measurement is presented as a map of depth z as a function of the position (x, y). To acquire the surface data, the system projects a pattern, also known as structured light, onto the patient.

Patterns can vary in color and can range from one dimensional line structures to 2D grids to multiple pseudo-random patterns. Pseudo-random patterns are designed to avoid ambiguity during surface reconstruction, as they are unique at every point. Fast moving patterns allow for better statistical sampling of surface point information leading to higher surface reconstruction accuracy, while still being tolerable to the eyes for the majority of patients undergoing treatment.

An imaging sensor, typically a video camera, records the 2D image of the pattern on the patient’s surface. If the surface is flat without any variations in depth, the recorded pattern is similar to the original projection. If the surface is not flat, however, the projected structured light pattern appears distorted.[1] If the spatial relation between projector and camera is defined, the depth information z can be recalculated using the following formula.[1]

To enhance system accuracy, current clinical SGRT systems use up to three camera pods mounted in different positions in the treatment room in conjunction with one or multiple structured light projectors. 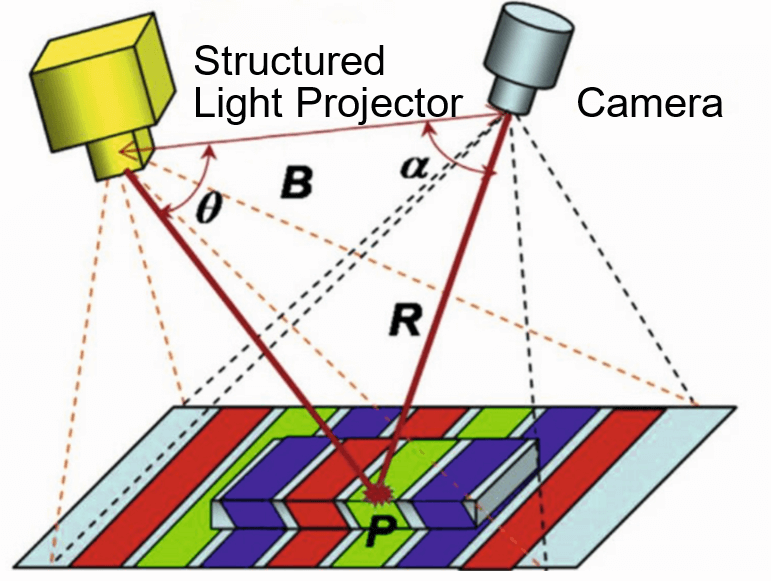 In particular for some regions of interest used for respiratory gating, this correlation can be inadequate for further margin reduction and normal tissue sparing. Alderliesten et al. investigated the heart position variability in deep inspiration breath hold (DIBH) radiation therapy.[3]. Only a modest correlation between surface and heart position was found, demonstrating that surface guidance isn’t a suitable technique to confidently monitor the dose to the heart.

During DIBH treatments for pancreatic cancer, internal organs move about 5 mm on average and in some cases movement even exceeds 1 cm.[4] Poor correlation of surface to internal motion may be a limiting factor if the treatment beam is planned to be gated by the surface system, as it could trigger inaccurate beam starts or stops.

This may require IGRT verification and cause subsequent delays in treatment or potential inaccurate delivery. Furthermore, the calculation of couch shifts can be compromised by a lack of internal information. Comparison between surface and volumetric registration of patients showed a mean translational discrepancy of 2.7 mm.[5] Error prone regions, such as facial soft tissues, are generally easily deformed. The option to use a surface registration technique in conjunction with internal imaging is therefore crucial for verifying the accuracy of the surface system for a particular patient and fraction.

Today, images of internal anatomy are most commonly acquired using devices mounted to the linac. However, the use of these devices throughout treatment is very limited.[6] Cone beam computed tomography (CBCT) or electronic portal imaging devices (EPID) at non-coplanar couch positions are either confined to inconvenient gantry angles or not possible at all due to the risk of linac collisions. Gantry rotations or extended imagers can occlude the view of lateral surface cameras, compromising the accuracy achieved by the surface tracking system. Simultaneous and flexible image acquisition of patient surface and internal anatomy is therefore the gold-standard for meaningful patient monitoring.

Figure 2: Effect of ambient illumination on structured light 3D scanning. A white cube was placed outdoors on a clear day and scanned with a conventional structured light scanner at differing times and ambient light intensities (2000 lux, 24,000 lux and 90,000 lux, respectively).[7]

Light attenuating surfaces such as darker skin tones or body hair can compromise image registration due to limited visibility of the projected pattern.[8]

At the core of any SGRT system is the ability to compare and register a live patient surface to a reference surface in order to detect spatial positioning deviations. This also represents the most complex process.

Matching two 3D point clouds is a common problem in computer vision; the state-of-the-art matching algorithm is the iterative closest point (ICP) algorithm. ICP matching describes an alternation between finding correspondence and optimizing an objective function to minimize the distance between corresponding points.[9] The ICP algorithm, however, shows significant instabilities in the registration of objects with translational or rotational symmetries as shown in Figure 3.

Figure 3: Examples of simple shapes that are unstable for ICP registration. Each shape has at least one translational or rotational symmetry that corresponds with the direction of instability. Below each figure the number and type of instability is noted.[10]

Image registration of objects like these can cause registration sliding effects, which for SGRT risk misalignment of the live patient surface with the reference setup surface. These errors in registration are described by Krell et al.[11] who investigated a commercially available surface tracking system. Uniform surfaces with minimal topographic information (e.g. breast, chest, flat abdominal area) caused problems during surface registration, forcing the clinician to choose larger than desired regions of interest to provide enough topographical information for sufficient surface registration, instead of smaller, more precise regions which may more closely represent the treatment location. This is a key limiting factor to the usefulness of surface tracking applications in RT.

Another way to minimize registration errors is to rely on radiotherapy tattoos, which are used to ensure that radiation is consistently delivered to a precise location even over multiple fractions. This method, however, comes as a permanent reminder to patients of their disease. Tattoos can be eliminated by adding more information to the tracking system, for example, with a thermal camera. The thermal camera gives the surface a unique pattern, enabling more reliable tracking of small, flat surfaces. This results in fewer registration errors and paves the way for tattooless radiotherapy.

In applications outside of RT, different approaches were tested to improve image registration and avoid sliding effects. The most common technique is to perform the alignment in a higher-dimensional space, characterized by 3D position in addition to other available information. It is much easier to establish sufficient correspondence in a four- or six dimensional space than just in the physical three dimensions. Several studies showed that registration quality could be improved significantly by adding color information to the dataset as an additional dimension.

A crucial requirement for the use of SLS systems in RT is to monitor possible patient shifts during treatment in real-time. System latency may cause problems in usability for patient pre-positioning and, more significantly, gating the treatment beam to prevent irradiation of normal tissue or insufficient target coverage.

For technologies used today, overall system latency is not limited by the frame rate of the SLS system, but rather the reconstruction time required to match the live and reference surfaces. This limitation is therefore not dependent on scanning hardware but rather on image post-processing software as well as the size of the tracked surface.

Figure 4: The system latency does not only depend on the camera hardware but rather on the speed of the processing algorithm.

To really take advantage of the accuracy afforded by all of these tracking technologies, they must be combined or augmented with additional methods, such as thermal tracking. Only then can clinicians reduce or even overcome the challenges and limitations of SGRT alone. Setups that provide a fully integrated patient positioning system that can monitor patients before and during delivery with higher accuracy and shorter treatment times are the key to improving future treatments.